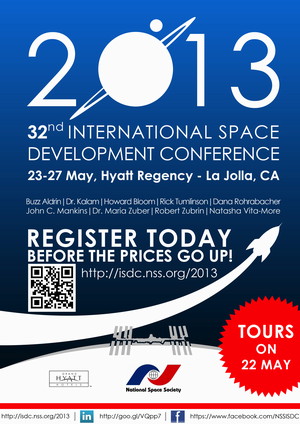 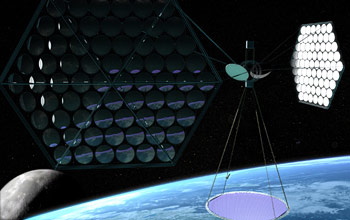 Four sessions, across 2 days, an all-star line-up of SSP pundits lay out the whys and wherefores for one and all. These researchers stand upon the shoulders of several hundred scientists, engineers, policy analysts, economists, and space enthusiasts who have built the foundation of the leading candidate for mankind’s ultimate source of renewable energy. Every presenter has accepted the challenge to present fresh, original material.

SSP has gained attention worldwide recently. Space activity is advancing rapidly. Many nations are contributing, and our speakers come from all over the globe. We welcome your attention and interest at this historic event.

Who should attend? You. And your friends and colleagues. SSP is multi-disciplinary. It’s really, really hard. We’re all working on how to make the engineering scale, the infrastructure available, the regime established, and the business case closed. The reason you should attend is that we’re getting it figured out at last. You will learn about multiple architectures, analyses, and enabling technologies, each driving towards abundant, clean, affordable sun power. This is the kind of convergence you see right before a major breakthrough.

Come take notes. Ask questions. Congregate at breaks and network. Mix it up and make it happen!

Click here to find out more about Space Solar Power from NSS!

Geologist, mining engineer and mineral economist consulting from Idaho Springs, Colorado on advanced mining and aerospace technology as well as the future economic use of space resources. Began researching lunar in-situ resource utilization (ISRU) in 1989 under NASA Space Exploration Initiative (SEI) funding as a graduate student at the Colorado School of Mines. During the summer of 1999, Brad was a visiting professional at the NASA/JSC Exploration Office, where he learned and practiced the art of cost estimation in support of a design reference mission for human Mars exploration. From 2001-2005, he and a small team at Colorado School of Mines conducted research for NASA on topics related to ISRU. Since that time Brad has worked under US and Canadian government research contracts, and has consulted for aerospace and mining industry clients on ISRU design and economic analysis as well as advanced technologies. He directly participa ted as a competitor in two NASA centennial challenges, and is currently advising and building NewSpace startup companies.

Dr. Curreri has been a scientist with NASA since 1981. In the two years prior to joining NASA he was a finalist in the second Space Shuttle Astronaut selection process, and an assistant professor at the University of Florida. He has authored over 90 technical publications, and has been Principal Investigator on 12 NASA research grants and Co-Principal Investigator on 2 Shuttle Spacelab flight experiments. He was the Mission Scientist for three Spacelab Missions, United States Microgravity Payload missions 2, 3, and 4, for which he was awarded the NASA Exceptional Achievement Medal. His past positions at NASA include leadership of Marshall's Biological and Physical Space Research Laboratory, Division Lead Scientist for Exploration and Marshall's scientist lead for Lunar Oxygen Production. He is currently serving as technical, scientific and manufacturing lead on various rocket materials research projects.

Deliana Ernst is a highly experienced lawyer, having worked for 18+ years with Big4, Nike and Shell. She has a background in international corporate tax and finance and holds an advanced Master's degree in Energy and Environmental Law from the University of Leuven (Belgium). Deliana established herself as an independent consultant and specializes in energy and climate policy and energy market regulation. She possesses a detailed and thorough knowledge of energy-related legislation together with current economic developments in the energy markets.

Founding editor of the Online Journal of Space Communication, and author of Solar Power Satellites: Springer Science and Business Media, 2012. He was Vice President of the Board of Directors, Society of Satellite Professional International for two terms, 2002-2008, and Co-chair of the SSPI Academic Council. A former Dean in three universities, and 15-year Director of a Research Institute, Prof. Flournoy has taught and written about Satellites and Space Communication since 1984. The international Sunsat Design Competition: Visualizing Space Solar Power, being launched at ISDC-D.C., was created and managed by Ohio University students under his supervision.

Keith's life is scattered over electronics, space engineering, memetics, cryonics, nanotechnology, evolutionary psychology and free speech to name just a few. He has run his own businesses and acted as a consultant since a 1972 dismissal for refusing to certify an electronic module for nuclear power plant use that failed to meet the required MTBF (Mean-Time-Between-Failure) specification.

Paul has worked on over a dozen NASA and Department of Defense space missions, including SSULI, STEREO, TacSat-1, TacSat-4, and MIS. He developed standards and lead spacecraft computer hardware development as part of the Department of Defense's Operationally Responsive Space effort. He served as a coordinator and editor of NRL's Space Solar Power (SSP) study report and is presently the principal investigator for an SSP-related research effort. His current primary role is as the Electrical Segment Lead for the Weather Satellite Follow-on (WSF) program in which he manages a large, multidisciplinary team. Paul is also active in educational and STEM outreach. He holds a Bachelor of Science in Electrical Engineering from the University of Maryland and a Master of Science in Electrical Engineering at the Johns Hopkins University. He is currently pursuing a Ph.D. at the University of Maryland.

Dr. Ohkami obtained Doctoral Degree in Control Engineering from Tokyo Institute of Technology and worked for National Aerospace Laboratory as research engineer on spacecraft attitude control and large space systems (1968-1992). During this period, he worked as visiting researcher at UCLA under NASA/MSFC contract (1972-1974) and Deputy Director for Space Station Program Office of Japan (1985-1986). He worked as professor at Tokyo Institute of Technology (1992-1999), and at Keio University (1999-2005) while serving as Research Inspector at JAXA Space Center (1999-2005). Currently, he serves as Executive Advisor after finishing the Dean of Graduate School of Systems Design and Management, Keio University. Major fields of his research include the Strategic Systems Engineering, Dynamics and Control of Complex Mechanical Systems, and Field Robotics. He is a fellow of Japan Society of Mechanical Engineers and the INCOSE, and life members of IEEE, SICE and Japan Society for Aeronautical and Space Sciences. He is awarded Academic Prizes from JSME, SICE, and others.

Seth Potter has worked extensively in the aerospace industry, where his experience has included space-based solar power, wireless power transmission, robotic satellite servicing, lunar/planetary mission design, radar system design, and solid-state science. He is currently an Entrepreneur-in-Residence at the Richard G. Lugar Center for Renewable Energy at Indiana University – Purdue University Indianapolis, as well as the NSS Board of Advisors. He holds a Ph.D. in Applied Science from New York University, as well as Bachelor’s and Master’s degrees in Physics from Columbia University. He resides in Southern California, where he serves on the Board of Directors of the OASIS – Los Angeles Chapter of NSS, as well as the Council of the Los Angeles – Las Vegas Section of the American Institute of Aeronautics and Astronautics (AIAA).

Darel Preble was advanced systems analyst for twelve years for Southern Company and wrote white papers on SSP in 1994, 1995, and 1996 for the electric power and aerospace industries on his time. He left Southern's strategic planning group in 1997 and incorporated the institute in association with Georgia Tech to understand the technology, business and energy policies necessary for utility-scale adoption of SSP. He organized, chaired and moderated "The Great Debate - Moon or Mars?" at the ASCE Space and Robotics 2000 conference (Glenn Research Center video GRC-401). He chaired the business case analysis section of the DoD's National Security Space Office's landmark 2007 SBSP study which was used to help justify Reaction Engines' SKYLON. His interests span commercial aerospace and utility-scale energy. Darel is married and lives in Atlanta, GA. He holds a BA in Physics from Vanderbilt University; MSA, Systems Mana gement (R&D Forecasting), George Washington University; and MA, Physics(Theoretical Nuclear Physics), Georgia State University.

Contributed to space agriculture with his former wife Carolyn Meinel and to studies on vapor phase manufacturing and the use of low pressure, high heat capacity pseudo fluids with Dr. Eric Drexler.

John has two BA degrees: in Anthropology and in Computer Science.NSS at-Large Director from Region 3. Joined the American Rocket Society (A parent of the AIAA) in 1961. Attended the launch of Apollo 10 and the first space shuttle launch. In 1975-6, joined the National Space Institute and the L5 Society, and have been a member for 34 years. John served as NSS Region 3 Director from 2004-2006 and am currently an At-large NSS Director, elected in 2010. John is a member of the Space Settlement Committee and Chair of the Awards Committee, and was on the Roadmap Committee 2010-2011. In 1988, John was the creator and designer of the NSS Heinlein award, and worked on the design for the Von Braun and O’Neill Awards.

59 years experience in aerospace engineering, including over 100 technical papers and articles. Worked for Boeing, NASA, Space America, and Gray Research consulting on flight simulation development, image processing, propulsion, and mission architecture. Mr. Woodcock was president of the L-5 Society when it merged with NSI to become NSS. 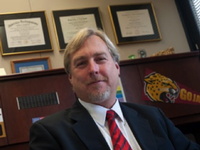 Dr. Schubert is Professor of Electrical and Computer Engineering (ECE) in the Purdue School of Engineering and Technology (PS&T) at Indiana University-Purdue University Indianapolis (IUPUI). He serves as Director for the Richard G. Lugar Center for Renewable Energy (LugarEnergyCenter.org), named after long-time Indiana Senator Dick Lugar. Schubert has published 80 technical papers in 9 distinct fields. He holds 35 patents in the US, 8 more in the EU, and has about 20 more pending. From 2007-2011 he was principal investigator on a NASA Small Business Innovation Research (SBIR) project on in situ resource utilization (ISRU). Peter is a member of AIAA and is on their Space Colonization Technical Committee. Within the NSS, Schubert is serving his 1st 2-year term on the Board of Directors, representing Region 6, the US upper Midwest. He started the Organization for Space Energy Research (OSER-SSP.org) a funded research not-for-profit with the goal of an objectively-optimized SSP architecture for which we can all advocate with one voice.

[ Click for Mobile Version ] Last updated on May 25, 2013. Copyright © 1998-2013, National Space Society. If you cannot see some of the images or text, please check your Ad Blocker or Twitter blocker filter, and add exception for NSS.org. Please report website problems to: . NSS Privacy Policy.

Special thanks to our Sponsors, Co-Sponsors, Exhibitors, Supporters and Affiliates.

Attendees! Signup for
T Minus 5 Presentation

If you do not see the ISDC Twitter feed, or a blank box, please allow a few moments while the Tweets to load. The Twitter widget may be slow sometime, and it is due to the Twitter side server. Some Ad Blocker software or company firewall will block the display of the Twitter Widget.